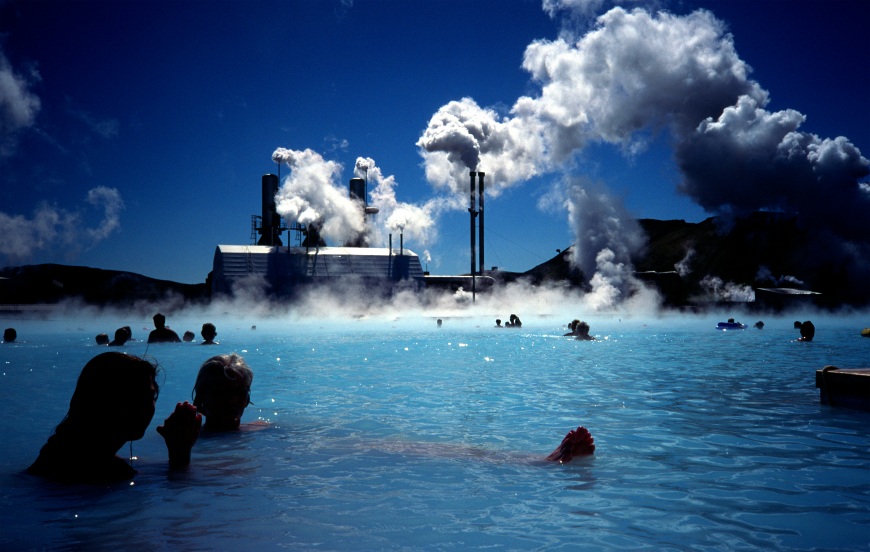 A couple of weeks ago I visited Iceland. It is home to vast quantities of renewable natural resources. The familiar tourist image of geysers, spouting steam and hot water into the air, brings the abstract idea of geothermal energy to life. Hot water and steam can be harnessed for heating homes and producing electricity. Apart from that the country has majestic rivers that are a powerful hydro-electric resource in their own right.

What makes Iceland especially interesting is that it presents a real existing example of a possible ‘blue’ future for Europe. A mere fifty years ago Iceland was dependent on imported coal and oil for its energy consumption. The images of black clouds of smog that covered the air over Reykjavik are still in the local popular imagination. Now Iceland has nearly phased out coal and oil. Geothermal and hydropower have been developed and 82% of its primary energy comes from domestic renewable sources. The sky over Reykjavik is clear from health-damaging smogs.

How did this transition work? Interestingly, while Iceland literally sat on top of endless renewable resources, it did not use them. Like other countries, it was locked in a fossil fuel regime. The oil crisis of the 1970s led to a rethink and, as so often, the key to the breakthrough was institutional change. Part of this was the National Energy Fund (NEF) that provided a risk insurance: NEF would reimburse up to 80% of cost of unsuccessful drillings. This helped entrepreneurs to really go at it. Now 99% of houses is heated with renewable energy and in 2008 savings were equivalent to 91% of the total imports of refined oil products.

Fascinated by the vast resources I asked people at the National Energy Authority about the possibility of using Iceland’s resources for foreign energy consumption. In terms of energy there is ample opportunity. The IDDP-1 well drilled in Krafla is at the moment the hottest well in the world with a temperature of 450°C at 40 bar pressure and 12 kg/s steam flow on surface with an estimated 25-35 MWe electric production capacity. New techniques allow for tapping into reservoirs with temperatures above 450 degree Celsius. It would yield around 50 MWe of electricity, from a single well. That is the equivalent of roughly ten state-of-the-art wind turbines. And there is ample possibility to drill new wells.

Iceland has vast ‘blue capacity’ in heat and water streams. Export of electricity is possible. A feasibility study had been done and the exploitation could be profitable. It would be costly but the money would be recouped. But there is a domestic political hurdle. What would it bring the country? It would be direct export, with hardly any jobs on the Icelandic side (indeed, a well is remote controlled, even in an operational site there literally is no one there over the weekends). In the wake of the Icelandic banking crisis, it was Björk, the celebrated pop star, who led a protest against selling off the right to exploit the wells to a foreign company. The revenues of exploiting Iceland’s natural resources should go to the Icelandic society rather than disappear in foreign corporate pockets, she argued. Björk as symbol of Iceland’s energetic society. After Iceland experienced a near meltdown of its banks this argument has only become more powerful.

Iceland’s citizens now enjoy low electricity prices and high disposable incomes. But the fear is that this would change once Iceland would be made part of a Northwest-European grid. But is this a necessity or a matter of political choice? After all, the particular way in which Iceland wants to exploit its natural resources is very much up to them.

Innovation to create the clean ‘blue’ technologies of tomorrow is a powerful story for the elites of Brussels. But a persuasive story must be able to convince ordinary citizens that there is something in it for them as well. Here it seems to be the one that shows how exploiting the vast renewable resources can be used to create public welfare. Revenues captured by the state and come to the benefit of the public. In making the next step it could make sure that the revenues go to the state and create a fund that would allow Iceland to pay for a very convenient welfare state with high investments in education and well being. So how to combine the energy strategy with a persuasive story about the future? Export the blue gold or Iceland becoming an internet hub by the virtue of the fact that it can host the datacenters of google and apple (with their high cooling / energy bills) at relatively low costs?

The example of Iceland shows that we need to put much more work in solid positive stories of what a clean ‘blue’ economy could look like, what it could bring and what they would require. It calls for a new emphasis in our science, in our thinking. Iceland and its dilemma’s should have a place in this.